The EU Emissions Trading System (ETS) has had a rough ride but at last the system appears to be working. In 2018 prices for emissions allowances rose and emissions from participating companies fell.

Established in 2005 the EU Emissions Trading System (ETS) is a cornerstone of European climate policy. The largest emitters have to buy allowances to cover their emissions and the total number of allowances issued is reduced each year. The companies participating typically emit at least 500 000 tons CO2e per year per site.

The system was first of its kind in the world in 2005 and unfortunately it hasn’t always operated as intended.  For many years too many allowances were issued and prices were too low to motivate companies to invest in reductions. But now prices are approaching the levels recommended by economists.

According to the High Level Commission on Carbon Prices (Nicholas Stern et al, 2017) the price consistent with achieving the Paris temperature target is at least €35 per ton CO2e in 2020 and should be €45-90 per ton by 2030.

The graph below shows EU ETS prices since January 2015. In the last 18 months the price has tripled, because of reforms pushed through by countries including Sweden. At the same time the total emissions reported by the participating companies has decreased by 3.9%. This is just what we want to see: in this case rising prices are good news for all of us. 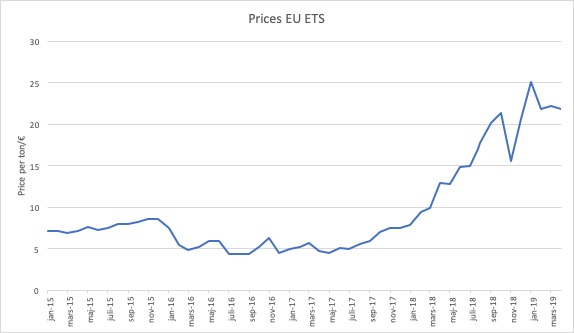