Greetings from the COP24 in Katowice

The Paris Agreement (PA) has been successfully adopted by 196 countries, but work on the technical details of how the agreement will operate was postponed until COP 24. The details and countries’ obligations will be agreed in the PAWP (Paris Agreement Work Program) and written into the Paris Rulebook.

The three years since the Paris Agreement was signed have flown by but the negotiations on the Paris Rulebook are very slow and there are a number of hurdles to overcome:

The Agenda of COP 24 is to agree on a solid and robust Paris Rulebook.

Even if it’s not possible to finish the Rulebook during COP 24, all countries should at least agree on the fundamental principles and decide the roadmap for finalizing the details.

As a member of organization of Climate, Land, Ambition, and Rights Alliance (CLARA), WARSI is looking forward to working with parties in Katowice to promote rights-based, people-centred and ecosystem-centred climate action. Personally I’m following discussions about the scope of NDCs (Nationally Determined Contributions), the Transparency framework, market and non-market mechanisms and financing particularly closely.

In the context of Indonesia, WARSI wants to secure land tenure for communities’ land tenure as a central part of the strategy for forest, including providing information on measures to respect and promote community rights. In addition, technical and financial support should be provided to incentivize local initiatives to protect and manage forests.

I also want to see the government moratorium on new licenses for deforestation of primary forest strengthened. And this should be followed by a review of extractive licenses which conflict with local communities and indigenous people, as well as promotion of forest restoration in peat and and other degraded forest areas in Indonesia. 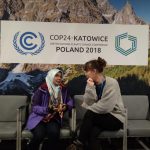