Driving across the island of Espiritu Santo in Vanuatu (South Pacific) to visit the Plan Vivo REDD project, we saw many coconut palm plantations, as in the photo below. The palm trees were tall and winnowy and we learnt that most are over 50 years old. 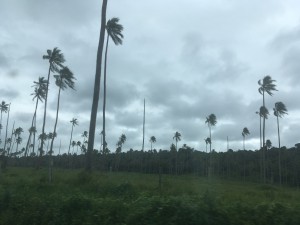 Over the last 200 years Vanuatu’s land has been used by waves of incomers for agricultural production. From the mid 19th Century, Europeans and Australians cleared forest to plant cotton, then coffee, cocoa and bananas. In the mid 20th Century the coconut plantations were established and most of the remaining hardwood timber in forest areas was removed.

Over time the coconut plantations are becoming less productive, and they’re being reinvented as cattle ranches. This time it’s the Japanese who are producing agricultural products from large tracts of Vanuatu’s land – high-quality beef.

Unfortunately this history – from forest to crops, plantations and now cattle ranching – is bad news for Vanuatu’s soils. Land becomes vulnerable to erosion when forest is removed, plantation crops take up nutrients and cattle compact soils. Hence the FAO assessment that the trend for agricultural production on Espiritu Santo is negative.

Given the country’s exposure to rising sea levels and more cyclones as a result of climate change, soil degradation can only increase the challenges for a less developed country with a rising population.