Guest blogger Amy Molyneux, intern at ZeroMission, reflects on the views of young people in the UK.
In recent months the horrors of climate change have been sweeping social media more than ever.  With most of my friends and I being only 17, and with a long life ahead we feel the pressure to stop global warming before it is too late.
Even though our generation will brave the consequences of climate change, we are the generation with the least political influence, and so it is frustrating that we cannot implement government policies or laws to stop global warming. 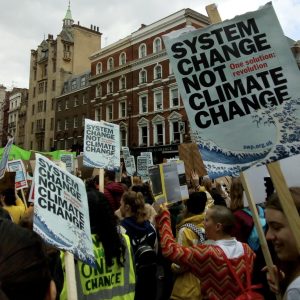 We have done what we can. Many of us have attended climate change protests and have gone on climate change strikes. Hundreds of thousands have joined a non-violent protest group called Extinction Rebellion, aiming to convince the government to declare an official climate and ecological emergency and to reduce biodiversity loss and GHG emissions to net-zero by 2025. Social media has been key to sharing our experiences and challenges and hopefully this widespread social action will soon be reflected in policy change.  Social media has also become a platform for people to share advice on how to live sustainably, with emphasis on cutting down on single use plastics, as well as the benefits of a vegetarian and vegan lifestyle.

The protests and climate strikes have brought to light a generation gap, with many elders dubbing the fear of climate change as a temporary trend.  They continue to deny the scientific evidence and facts presented to them. Unfortunately some politicians take this stance as well, with Trump saying climate change was “created by and for the Chinese” to worsen America’s economics.
Staying within the Paris Agreement’s  1.5 °C temperature rise limit will be hard to achieve with these people in power, but is possible, and we will try our best to make it happen.
Gästbloggare
info@zeromission.se